5 catastrophe scenarios for the US economy

New York magazine has a pretty dire reading of how the US economy could go down in flames. People will call it a black swan when it happens, but it's anything but. The funniest bit is this:

The bulls will tell you that foreign governments understand the American economy is the key to global economic health, and that they'll suck it up and take it when we devalue their debt. To which Schiff offers another analogy. Imagine if five people were washed up on a desert island: four Asians and an American. In splitting up their duties, one Asian says he'll fish; another will hunt, another will look for firewood, and another will cook. The American assigns himself the job of eating.

"The modern economist looks at this situation and says the American is key to the whole thing," says Schiff. "Because without him to eat, the four Asians would be unemployed."

Black Swans of the Future

Over at Global Guerillas, John Robb has some interesting comments about global security and peak oil. But he kinda wound me up this morning with his off-the-cuff suggestion that the current mortgage crisis exhibits all the hallmarks of a black swan (that is, an event that defies prediction, but it is usually obvious in hindsight):

The financial carnage -- hedge fund failures, bank runs, credit tightening, and potentially a recession -- due to the current mortgage crisis demonstrates (yet again) that very smart people can do incredibly stupid things. For all of the insight, experience, and knowledge we gained through previous financial failures, we still walked blithely into the gaping maw of the delinquencies, defaults, and outsized bailouts that characterize a financial black swan.

I think this is a total misreading of the current mortgage situation. In fact, many people over the last few years have observed -- often in the same breath -- that (1) the relaxation of credit terms for the poor invariably winds up in a credit crisis, and (2) the global housing market was exhibiting every sign of a bubble. The only thing that might arguably have been a surprise is how badly people had priced the CDOs, and how illiquid the markets for these vehicles were. (Even that was pretty obvious to the folks involved in creating those products.) That's the triple play that led to this summer's financial crisis: lax credit terms for the poor, a housing bubble, and untested financialization. Anyone could have -- and a lot of people did -- predict that this mix was unlikely to have a happy ending. So, let's not call it a black swan when what we have here instead is the classic American mix of privatization of profit and socialization of costs. The charade of acting like all this was unpredictable is simply a ruse to make the bailout of bankers politically palatable.

What other future alleged Black Swans can we debunk in advance? Let me put on the record some other big, bad events that we can already see coming, and that no one ought to get away with acting shocked about when they do:
* A rapid, messy collapse in the US dollar
* A major inflationary episode in China
* A major global recession, deepened by populist anti-trade reactions
* The detonation of a nuclear device in a major global port
* All four of the above simultaneously....

When these things happen, some people will be tempted to call them Black Swans. They will base that claim narrowly, citing the particular way the event was precipitated, and the fact that certain smart were caught with their pants down, as "proof" that the event in question was "unpredictable."

But as overall categories of happening, I think these -- like the long-predicted popping of the housing bubble -- are not black swans, but more like "inevitable surprises." The particular way in which the event will come about will be unpredictable and revealing of mass complacency, but the chance that at least one of these events will take place in the next decade strikes me as better than even. In fact, the wonder with all of those events is that they haven't happened already. Of course they'll take people by surprise when they happen, but that doesn't mean they are surprising in the stricter epistemological sense that Taleb uses the term "Black Swan."

Bottom line: Just because the public or some individual is complacent, doesn't mean that the bad stuff that happens to them was a Black Swan.
Posted by Nils at 10/26/2007 10:23:00 AM 0 comments

Here is an important and underreported story: the housing slump in the U.S. is causing economic catastrophe in Mexico.

Housing starts have long considered the best single indicator of future economic growth -- it employs a bunch of people, who cycle money through the economy, and it creates a lot of demand for building materials, which has multiplier effects on the wider economy. (It's also a harbinger of inflationary pressure.) All this has led people to ask, "How is it that a collapse in the construction industry over the last year, brought on by the popping of the housing bubble, hasn't rippled out to the rest of the economy?"

Well, the article above provides a partial answer to the mystery. It turns out that the construction slump has rippled out to the rest of the economy -- it's just that "the rest of the economy" is in Mexico. The reasoning goes like this: Mexicans (legal and otherwise) overwhelming dominate the rank and file of building trade in the United States. These construction workers never spent more than the minimum necessary here to keep body and soul together, and instead remitted as much money as possible back home to Mexico. As the construction workers have lost work, they've stopped sending remittances home, with disastrous consequences in Mexico. However, they still have to spend the minimum here in the U.S. to keep themselves together, and so the collapse has had little impact on US consumer demand. To put it a little more technically: all the marginal consumer-side costs of the U.S. construction slump are being felt in Mexico, not in the U.S.

This helps explain half the mystery of why the construction slump hasn't hurt the economy more -- the consumer-side part of the story. The part that's still a mystery, however, is why the construction slump isn't causing more of a collapse in supplier industries (metals, concrete, electrical cable, Home Depot, etc).
Posted by Nils at 10/26/2007 08:29:00 AM 0 comments

Image of the Day 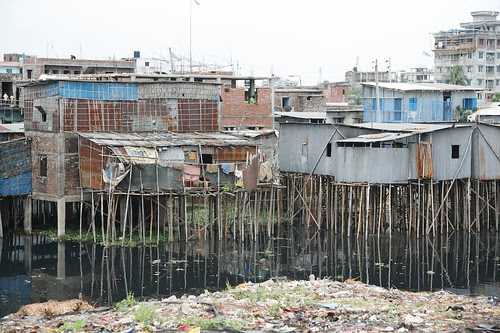 The Dhaka slums... definitely ready for that next typhoon.