Movies of the decade

Lovelock has spent most of his career trying to understand the consequences of increased greenhouse gas concentrations in the atmosphere. In his latest book, The Vanishing Face of Gaia: A Final Warning, he argues that Earth's system of self-regulation is being overwhelmed by greenhouse gas pollution and that Earth will soon jump from its current cool, stable state into a dramatically hotter one. All climatologists acknowledge the existence of such climatic jumps—as occurred for example at the end of the last ice age. But chaos theory dictates that the scale and timing of such leaps are inherently unpredictable, which means that they cannot be incorporated into the computer models of Earth's climate system that such scientists use to project future climate change. Yet this is precisely what Lovelock attempts to do—using his own computer modeling—in The Vanishing Face of Gaia. A new climatic jump, he concludes, will occur within the next few years or decades, and will involve an abrupt increase in average global surface temperature of 9 degrees Celsius—from 15 to 24 degrees Celsius (59 to 75 degrees Fahrenheit). Such a shift, he contends, will trigger the collapse of our global civilization and the near extinction of humanity.

This will be a temperature jump greater than that while occurred at the start of the Holocene (the end of the last Ice Age), but with humans now overwhelmingly sedentary, our capacity to move in response to the northward shift of climate zones is much less than it was for our hunter-gatherer ancestors. Abrupt change in the weather will be followed somewhat more slowly, but perhaps even more devastatingly, by the melting of the Greenland and West Antarctic ice sheets and consequently rising sea levels. Even under Lovelock's most dire scenario, this process will unfold over several hundred years, albeit mainly in the form of statis followed by sudden shifts in coastlines after storm surges. Florida will shrink like this:

Long before sea levels rise 50 meters, however, half of Bangladesh (home to 150m+ people) will go underwater: 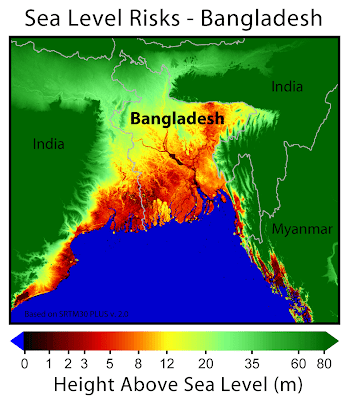