Quote of the Day

Emile Durkheim, on the social consequences of economic disasters:

In the case of economic disasters, something like a declassification occurs which suddenly casts certain individuals into a lower state than their previous one.... Time is thus required for the public conscience to reclassify men and things. So long as the social forces thus freed have not regained equilibrium, their prospective values are unknown, and so all regulations are lacking for a time. The limits are unknown between the possible and the impossible, what is just and what is unjust, legitimate claims and those which are immoderate. Consequently, there is no restraint upon aspirations....

High modernism in architecture is strongly associated with the figure of Le Corbusier. This version of high modernism sought to impose rectilinear, uniform solutions on everything, from the architecture of cities to the lives of men, literally bulldozing anything in its way. Consider Le Corbusier's infamous plan for the right bank of Paris. 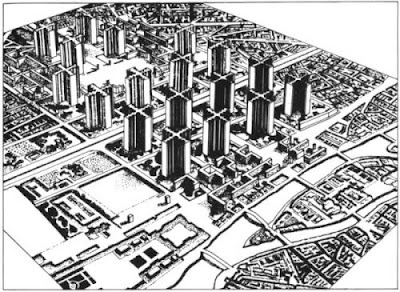 In the arena of development studies, High Modernism has been grandly criticized for its indifference to the richness of premodern social orders, and for its brutal simplifications that often have produced political monstrosities, from Stalinism to Tanzania. Modernization theory was the American entry into this hall of horrors, and although it continues to live a troglodytic existence in the life of the American Mind, it is today an officially repudiated doctrine.
In China, on the other hand, modernization theory is not regarded as a historical curiosity of American mid-century hubris, but rather as a blueprint for their own contemporary efforts to bring themselves into the final stage of history, what modernization theorist Walt Rostow famously described as "the age of high mass consumption." And guess what, their taste in city planning reflects this heritage, as one can see from this billboard advertising a construction plan in Shenyeng, Manchuria: 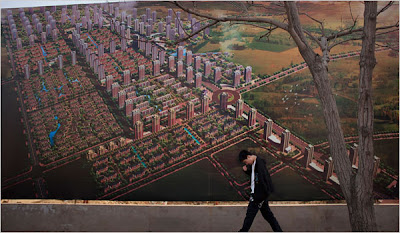