The difficulty with writing about apocalypse

I read Matthew Glass's Ultimatum this weekend. Only so-so. What's weak about it, as a scenario exercise, is that Glass creates his imaginary future by running forward a rather extreme set of climate numbers, and the most optimistic numbers about Chinese growth, but otherwise holding everything entirely static. Thus, despite the fact that vast evacuations of costal areas are now necessary (something he portrays only from the Olympian heights of the White House war room) and the Chinese economy is now twice the size of the U.S.'s, political alignments both domestically and globally are unaltered. How realistic is that?
What makes it so hard to prognosticate a couple of decades out, on virtually any subject, is that there are so many moving variables that one has to consider. Things Glass doesn't bother to consider, for example, is how radical genetic engineering may fundamentally change conceptions of practices of life; how major shifts in geopolitical alignments can take place very quickly (France-German, 1945-1951; U.S.-China in 1971; U.S.-Iran in 1979; U.S.-Russia in 1989, etc.); how aging populations may fundamentally change immigration politics; how coming egenry shortages are going to fundamentally shift adaptation options; and so on.
The result is that the book reads like a Bolshie Brit's fantasy about what it would be like if a belligerent version of Obama had been elected President in 2033, and then appointed Bill Kristol as his Secretary of State.
However, within that structurally weak frame, the novel is quite illuminating about how lefty Brits view American and Chinese politics today, and why ever getting an emissions deal done will be impossibly difficult.
Finally, Glass never considers that as the catastrophe happens, it may not even really be perceived as a catastrophe at all. That's the key insight of J.G. Ballard in The Drowned World.
Posted by Nils at 6/29/2009 11:05:00 AM 0 comments

Remember that DHS report on the threat posed by domestic "right wing extremists" -- you know, the one that got the, well, right wing extremists so up in arms (if you'll pardon the expression)? Turns out to have been pretty prescient. First in Kansas, now in DC.
More here.
Posted by Nils at 6/10/2009 12:16:00 PM 0 comments 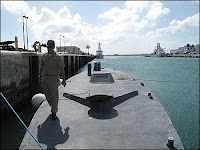 When anti-narcotics agents first heard that drug cartels were building an armada of submarines to transport cocaine, they thought it was a joke. Now U.S. law enforcement officials say that more than a third of the cocaine smuggled into the United States from Colombia travels in submersibles.

An experimental oddity just two years ago, these strange semi-submarines are the cutting edge of drug trafficking today. They ferry hundreds of tons of cocaine for powerful Mexican cartels that are taking over the Pacific Ocean route for most northbound shipments, according to the Colombian navy.

The sub-builders are even trying to develop a remote-controlled model, officials say.

"That means no crew. That means just cocaine, or whatever, inside the boat," said Michael Braun, a former chief of operations at the U.S. Drug Enforcement Administration..."This is definitely the next generation of smuggling conveyance," said Joseph Ruddy, an assistant U.S. attorney in Tampa who prosecutes narco-mariners.

I am in the middle of reading a book called "Wired for War" which looks at the evolution of armed and autonomous robots in military operations. The author, mostly, looks at it from the perspective of established armed forces, but one can hardly ignore the more criminal possibilities. I know that martyrdom is portrayed as a virtue in reporting of terrorist operations, but that has to be a tough recruiting pitch. The assault on Islam by neo-cons was a failure, but I wonder if --when personal sacrifice is no longer a barrier to entry-- our current policy of peace through understanding will turn out to be yet another example of “fighting the last war.”

So David Carradine, who was found dead yesterday in a Thai hotel with a rope around his genitals and neck, apparently died from auto-erotic asphyxiation. Which prompted the director of Thailand's Central Institute of Forensic Science, Pornthip Rojanasunand, to make the following sage pronouncement:

"If you hang yourself by the neck, you don't need so much pressure to kill yourself. Those who get highly sexually aroused tend to forget this fact," Pornthip said.