Via Jason Tester, the blog Burrito Justice offers up an amusing and nicely written scenario on what San Francisco may look like if we experience 25m+sea level rise on account of unabated climate change. A glimpse of our watery future by the Bay: 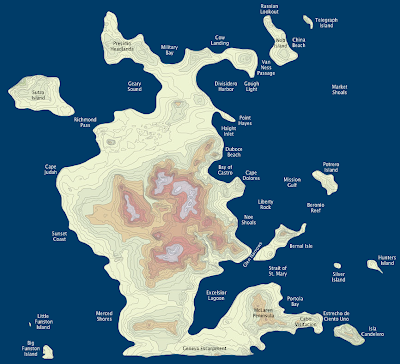 Part of what's compelling about BJ's scenario is that it's written in a compelling voice, that of the wire-story-as-stenography-for-civic-boosters, a genre we're all woefully familiar with. For example:


Development of high rises along the Sunset Coast and Cape Dolores has not been without controversy. The SHSFPA (Submerged Historic San Francisco Preservation Association) has once again protested and filed an environment historic review. “Old San Francisco is still alive in our hearts and minds, even if only the tops of the buildings can be seen! Look at the Flickr archive! Viva La Décimonovena! Viva El Vigésimocuarto!” While the SHSFPA frustrate many, all agree that their work floating Victorians and Italinate era homes and converting them houseboats has been a grand success, and has fueled a tourist boom along the Noe, Bernal and Dolores docks. The historical reenactments of life in the Mission District of the early 21st century have proven particularly popular.

In other words, even in a San-Francisco-become-Atlantis future, we'll still be beset by civic boosters promoting the same vision for our fair City by the Bay. Sure, the shoreline will have moved, but everything else will be largely the same. The narrative voice here has the same function as the Howard Johnson's on the moon in "2001: A Space Odyssey": it offers the reader the tacit reassurance that the social atmospherics of the future will be much the same as in the present.

But here's the thing. As usual with science/technology-driven scenarios, there's a hidden (and false) assumption that social-political-economic conditions will largely hold steady, and that the ONLY thing that will change is the science and technology (or in this case, the environment). Indeed, holding the social-political-economic context constant allows the writer (and reader) to bring the environmental parameters into sharper relief in the minds of readers. But in doing so, it also paints a profoundly false image of what the actual future is likely to look like.

In fact, along the way to this dramatic environmental future there will be huge social, economic, political, technological (not to mention military) changes, and the pace of change in these latter areas is bound to be far faster than the pace of change of the environment. (If you're interested in pace-layering, more on that here.) The environment may be the driving variable BJ wants to focus on, but the change will be much more radical and rapid in these other layers. The real challenge in imagining what climate change will do to us, in other words, is not to paint a revised sea level map of San Francisco, but to think through the social, economic and political changes that will (must) happen along the way and as a result of the environmental ones.

Let's start with the simplest point: a sea level rise of the sort this scenario imagines would imply a global and national economic catastrophe of a magnitude that would almost certainly propel the collapse of existing political institutions, locally, nationally, and internationally. If these conditions pertain in San Francisco, just consider what's happening in the rest of the world: goodbye London; abschied Amsterdam and Hamburg; zàijiàn Shanghai and Hong Kong; sayonara Tokyo and Osaka; adios Miami, Los Angeles, New York, Washington; etc. etc. (Here's a map you can play with to get a sense of the scale of the geographic losses.)

This sort of loss of land, especially at the pace this scenario imagines, implies not a gradual process but rather a series of catastrophic storms that rearrange coastlines by hundreds of meters at a time in a cascading series of unsalvageable fell swoops. We're talking about a Hurricane Katrina / New Orleans scenario, in every major coastal city in the world, more or less simultaneously, with no one ever coming over the horizon to help the survivors. Just at a human level, imagine the refugee crises, and the grasping for resources that this will create. It will spell the utter ruin of these nation-states, and with it, the associated economies. This, in turn will necessarily precipitate a catastrophic social implosion (probably including a demographic one).

The idea that under such circumstances we in the Bay Area are going to be continuously rebuilding high-tech infrastructure, as opposed to engaging in mere sauve qui peut salvage operations, is rather foolish. Instead, the various islands and archipelagos of the San Francisco Bay region are more likely to be ruled by warlords and neo-tribal clans of various sorts. It will be an armed society, but probably not a polite one. Which in turn implies that the central literary conceit of BJ's scenario, namely that local civic associations in San Francisco will survive and remain focused on things like historic underwater preservation, is a joke of questionable taste.

I should hasten to add that I don't think this at all an unrealistic scenario that I am offering as an alternative. It's more or less what happened, for example, in Rome in the five hundred years following the conversion to Christianity: political and economic crisis, repeated sackings by barbarian hordes, and eventually a 99% fall in population, from over a 1,000,000 in 210 AD to perhaps just 10,000 at the turn of the first millennium. By 1100, each of Rome's seven hills was governed de facto by a different warrior clan, who would graze their cattle and occasionally do battle with each other amid the ruins of antiquity down in the plains. Other than a few monks, almost no one remembered the origins of those ruins. Instead, the were treated as a useful quarry for scavenging building materials to construct fortifications for self-defense against rival gangs.

Something like that, except with high-power rifles, is a more likely outcome for the kind of climate change scenario that is the premise for BJ's scenario. But don't worry, it'll still be sweet reading about all of it on our 77th-gen iDevice...
Posted by Nils at 3/23/2012 04:59:00 AM 0 comments