Deviant Globalization and the Origins of AIDS

Part epidemiological whodunnit, part late colonial history, Jacques Pepin's new book The Origins of AIDS is the definitive text on the origins and globalization of HIV. While the book contains many wonderful things, of particular note is its emphasis on how both the humanitarian horrors of colonial development and the chaotic breakup of colonial authority led to fundamental changes in a variety of deviant industries, which in turn facilitated the spread of AIDS. 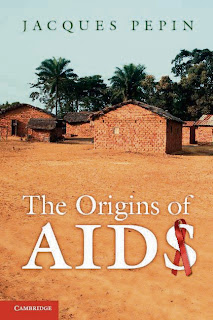 At least six different deviant industries were crucial in enabling or propagating the AIDS epidemic. First, Belgian and French colonial development efforts (railroad building and mining, in particular) in central Africa increased demand for meat. This in turn spurred the hunting of simians, a dangerous and sanguinary activity which often led to injuries for those hunting and slaughtering the animals. It was this wrangling with apes that led to the seminal crossing of the HIV-1 virus from chimps to humans, some time around 1920.

Second, the breakup of colonialism in Africa, and particularly the extreme chaos of the Belgian departure from Congo in 1960, led to wholesale changes in the local markets for commercial sex. During the late colonial period, Central African prostitution generally took the form of a fairly stable institution where a "free woman" might perhaps have a handful of regular clients. In the wake of the Belgian departure, chaotic mass urbanization and pauperization transformed the local prostitution industry into one where the prostitutes had little choice but to turn dozens of tricks weekly with many more clients. This change in sexual habitus amplified the transmission of all sorts of STDs within urban centers of Congo and former French Central Africa, including HIV.

Third, the global transmission of the virus out of Africa itself was a product of a certain kind of moral arbitrage, as the United Nations dispatched troops to Congo as part of the mission to "restore order" in that broken country. Inevitably, these soldiers became consumers of the local prostitution industry, which would soon transform them into vectors for the propagation of what until then had been a disease confined to Africa. Specifically, it may be surmised that at least one of the 3500 Haitian soldiers brought the HIV virus back to Haiti some time in the mid-1960, where he introduced it into the general population, perhaps with further visits to prostitutes.

Fourth, like many other miserably poor countries with virtually nothing else to produce or export, Haiti in the 1970s was the site of two additional deviant industries, each of which would prove crucial for the globalization of HIV. On the one hand, in the early 1970s, Haiti became the site of a commercial market in blood products (organized by a Miami businessman) such as plasma. Poor sanitation in this industry may well have helped to diffuse the HIV virus within Haiti, though the evidence here is spottier. On the other hand, Haiti was also an important site for sexual tourism, an industry which was flourishing in the post sexual-liberation era. More specifically relevant, Haiti was a go-to destination for gay sex tours organized out of San Francisco and New York during the 1970s. It was in this way, Pepin argues, that HIV was introduced into the United States some time in the early-to-mid-1970s.

Finally, once the plague arrived on these shores, injection drug usage facilitated the spread of the disease within the archipelago of 1980s urban demimondes. More specifically, the prohibition on drugs encouraged needle-sharing among drug addicts, and this in turn proved crucial for exploding the number of infections within this population, as well as with their sexual partners.
Posted by Nils at 2/21/2012 12:34:00 PM 0 comments

Metaphors We Die By

My colleague Mick Costigan and I have just published a short rejoinder to Michael Lind's thought-provoking essay, "Against Cosmopolitanism." Ulrich Beck also has a comment. The whole discussion is here.

In contrast to Lind, who argues that the nation-state has never been a stronger and more effective force, and is destined to become even more powerful, we argue that:


Nation-states are being undermined simultaneously (1) from below, by transnational criminal organizations (TCOs), and (2) from above, by transnational financiers who have innovated means to capture or to evade national regulatory apparatuses. Unlike the cosmopolitans, these actors do not have as a goal the usurping of the nation-state either individually or as some form of conspiratorial group. Rather, degrading the capacity and legitimacy of their "host" nation-states is simply an emergent, unintended, and indeed unwanted byproduct of their activities.

The effects of these non-state actors on different kinds of countries varies quite dramatically, in ways that might best be understood by way of a metaphor. In our view, the old nation-states are the geopolitical equivalents of blocks of ice, upon which the rise of tech- and globalization-empowered non-state actors act like a rising heat. The size of the ice-block (e.g. the size and institutional capacity of the state at T=1970) determines both the rate effects of the heat on the ice and the downstream effects of the melt.

A state like, for example, Zaire was the equivalent of a wee ice-cube: the heat of globalization very quickly melted it away altogether, with catastrophic local consequences but limited external effects. By contrast, a country like the US is more like the Greenland ice sheet: it will take a very long time to melt completely, but as it does, the deluge will be devastating far beyond its own perimeter.
Posted by Nils at 2/07/2012 09:11:00 AM 0 comments