The professionalism of the Bush regime

Le Monde Diplomatique has a nice high-level synthesis on the professionalism and care with which the televised spectacle of the Bush Presidency has been created.

Too bad such professionalism never was applied to the actual process of governing the country.
Posted by Nils at 1/31/2008 04:01:00 PM 0 comments

It's just "trust us"

Russ Feingold sums up signficiance of Bush administration's demands around abrogating FISA. It comes down to the government's ability to snoop, without having to answer any questions as to why.

Reagan's biographer claims that George Bush, in every substantive sense, is the fully worthy heir of Ronald Reagan.
Posted by Nils at 1/26/2008 10:12:00 PM 0 comments

Palestinian hip-hop on what constitutes terrorism

Offered without comment, other than to note the sophisticated production values:

The Fall of the Gaza Wall 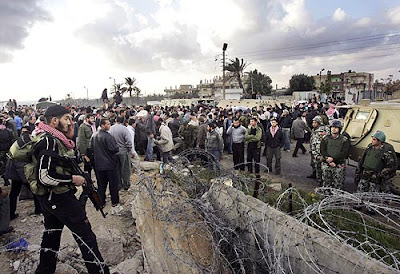 Looking at the scene of Gazans streaming through the broken wall separating them from Egypt reminds me vividly of the scene in November 1989 when the Berlin Wall fell, but without the jubilation. A similar underlying political bankruptcy underpins both images.

T.E. Lawrence, explaining what guerrilla warriors, particularly in Arabia, need in order to succeed. From the Encyclopedia Britannica (1929):

Here is the thesis: Rebellion must have an unassailable base, something guarded not merely from attack, but from the fear of it: such a base as the Arab revolt had in the Red Sea ports, the desert, or in the minds of men converted to its creed. It must have a sophisticated alien enemy, in the form of a disciplined army of occupation too small to fulfill the doctrine of acreage: too few to adjust number to space, in order to dominate the whole area effectively from fortified posts. It must have a friendly population, not actively friendly, but sympathetic to the point of not betraying rebel movements to the enemy. Rebellions can be made by 2 percent active in a striking force, and 98 percent passively sympathetic. The few active rebels must have the qualities of speed and endurance, ubiquity and independence of arteries of supply. They must have the technical equipment to destroy or paralyze the enemy's organized communications, for irregular war is fairly Willisen's definition of strategy, "the study of communication," in its extreme degree, of attack where the enemy is not. In 50 words: Granted mobility, security (in the form of denying targets to the enemy), time, and doctrine (the idea to convert every subject to friendliness), victory will rest with the insurgents, for the algebraical factors are in the end decisive, and against them perfections of means and spirit struggle quite in vain.

When Small Precautions speaks of the United States losing the war against Al Qaeda, our claims are rooted in an appreciation for this sort of venerable analytical approach to the problem of insurgency and rebellion. In the 64 months since 9/11, has the Bush administration managed to achieve any of the goals which Lawrence lays out here?

First, has Al Qaeda lost its unassailable base? It appeared in the Fall of 2001, during the invasion of Afghanistan and the Tora Bora campaign, that they might be about to. But in recent years the U.S. has been forced to concede that Al Qaeda has managed to reconstitute their "unassailable base" in the Northwest Frontier and FATA provinces of Pakistan.

Second, does Al Qaeda face, in the United States, "a disciplined army of occupation too small to fulfill the doctrine of acreage." Even the local NATO commander agrees that U.S. does not have enough troops to command the space in question.

Third, does Al Qaeda operate among a friendly population, even if ninety-eight percent of this population is merely passively friendly. Again, obviously yes. Despite huge bounties on all the principles' heads, the local population has betrayed no one in Al Qaeda's senior leadership.

Fourth, does Al Qaeda continue to "have the qualities of speed and endurance, ubiquity and independence of arteries of supply." Again, clearly yes. Pakistan is a widely globalized country, and connections to the outside world are far more numerous than in, say, the hinterlands of Afghanistan or Sudan.

Finally, does Al Qaeda have the "technical equipment to destroy or paralyze the enemy's organized communications?" Here the answer, from a technical perspective, is obviously no. However, the technology of communication has vastly advanced since Lawrence's time, and one can at least make the claim that from a propaganda perspective (which is what Lawrence is mainly talking about here, rather than battlefield communications), Al Qaeda has achieved at least parity with the United States. The United States still lacks basic visual literacy, by which I mean that it still lacks a basic understanding of the rhetoric of Internet-era visual communications, and hence lacks the ability to challenge and disrupt the media efforts of Al Qaeda.
Posted by Nils at 1/24/2008 09:37:00 AM 0 comments

For any of you think of voting for Hillary, hear this...

Listen to what dues-paying right-winger David Brooks has to say about how the Bushies view Hillary:

Ugandan officials are claiming (without much evidence, to be sure) that Al Qaeda was plotting to kill Queen Elizabeth at a Commonwealth meeting in Kampala last year.

Whether or not it's true, it's certainly plausible, and would have been exemplary of global guerrillas' search of what John Robb refers to as "cultural systempunkten": that is, attacks that activate a deep-seated cultural faultline, causing "irrational" counterresponses. The most conspicuous recent example of such an intentional act of cultural provocation was the bombing of the Golden Mosque in Samarra in February 2006, which by enraging the Shi'ites, precipitated the worst period of communal bloodletting in Iraq since the start of the war. The point of such attacks is that they cause systems disruption in an indirect fashion.

Had it been successful, the Qaeda attack on Queen Elizabeth in itself would have had few if any direct implications for the functioning of either the international system or the British state or monarchy. Queen Elizabeth herself, personally, is unimportant. However, such an attack might well (and certainly would have been intended to) provoke cataclysmic iatrogenic effects from the British, of a sort that are relatively easy to imagine. Depending on leadership's reaction, would not the British public have been roused, albeit in unpredictable ways? A successful assassination might, on the one hand, have precipitated massive demand for withdrawal from Iraq/Afghanistan. Then again, it might also have sparked retaliatory lynchings of Muslims in British slums (to be broadcast live by Jazeera, natch), with attendant roiling of global affairs and improved recruitment opportunities for Qaeda, etc.
Posted by Nils at 1/15/2008 05:36:00 AM 0 comments

In response to a friend's inquiry, I've been doing a little more digging into the relationship between modernization theory and concepts of European integration. There appear to have been homologies and sympathies, if not a common point of origin, between these efforts in the 1940s. Specifically, I've been looking at the connections between Walt Rostow, the Marx of the modernization movement, and Jean Monnet, commonly seen as the intellectual architect of the European Union.

As Assistant Chief of the German-Austrian Economic Division at the State Department in 1945, Walt Rostow argued in favor of a Council of Europe within the United Nations that would include all European countries, including the Soviet Union. It was in this context that he first met Monnet in the spring of 1946, when Monnet was in Washington negotiating postwar loans for France. Rostow contacted Monnet through his older brother Eugene, who had known Monnet since 1943, when both were in North Africa. Walt had Eugene lobby Monnet personally to support Rostow's idea for a unified Europe, and Monnet accepted this idea. This proposal was approved by the UN General Assembly in December 1946. So: the personal connection there.

At a more ideological level, what connects Rostow and Monnet is the shared vision of refashioning the world along American lines. Apparently modernization was the linchpin of European unity in Monnet's mind. In a quote I haven't been able to corroborate, but which appeared in the Economist in 1994, Monnet is said to have told Rostow in 1947 that, "First we must modernise France. Without a vital France there can be no Europe. Then we must unite Western Europe. When Western Europe unites and gathers its strength, it will draw in Eastern Europe. And this great East-West Europe will be of consequence and a force for peace in the world."

As this quote suggests, both modernization theory and European integration were based on essentially universalist, cosmopolitan visions of global homogenization under a liberal banner. In calling these projects "universalist," however, we should emphasize that these were not Hegelian programs of ecumenical reconciliation of all the elements in a unified whole that would sublate the essences of each state in a higher order. Rather, they were universal projects that sought to remake and homogenize societies wholesale. The goal, in short, was to liberate by making everyone a liberal.
Posted by Nils at 1/11/2008 09:10:00 AM 0 comments

Quote of the day

The systematic overrepresentation of Mormons among top businesspeople and lawyers affords LDS affiliation a certain cachet — rather like being Jewish, but taller.

A reader writes into the NRO lamenting the way this election season is unfolding:

A President Edwards, or Obama, or Clinton, combined with a Democratic Congress, would surely mean ruin for Iraq and woe here at home. [Italics added.]

Woe for Republicans I can see, but the notion that a Democratic administration would mean ruin for Iraq is hallucinatory.

Yeah, buddy, things have been just outstanding for Iraq under a GOP President and Congress. Outstanding, I tell you!
Posted by Nils at 1/03/2008 07:40:00 PM 0 comments