Libya as example of R2P?

There have been not a few commentators, from the bleeding hearts on the liberal left to the usual suspects on the neocon right, who have been celebrating the raining down of Tomahawk missiles on Libya as a wonderful return of morality to foreign policy. In particular, there has been all sorts of palaver about how the much-ballyhooed efforts of Europeans in 2005-6 to instantiate a permanent "responsibility to protect" (R2P) the weak from the depredations of their own governments has finally found its clarion case in Libya, thus putting behind us all our painful failure to act in places like Rwanda, Darfur and elsewhere. No sooner does Qadaffi roar about how he will pursue the rebels without mercy than "the international community" (e.g. the UN Security Council) votes to impose a no fly zone. Bliss was it in that dawn to be alive!

But there at least two reasons to be skeptical about this narrative of how Libya represents a new dawn for humanitarian interventionism and R2P. First, the vote in the Security Council is not nearly what it appears from the headline. Notably, Brazil, Russia, India, China, and Germany abstained from the vote. Although Qadaffi has no friends left who are actively willing to cast votes to defend his regime, the BRIC nations have been increasingly vociferous in denouncing the intervention by the French, British, and Americans. Even more shocking is that Germany, one of the original promoters of the R2P principle five years ago, pointedly refused to vote in what supposedly was a black and white test case. When countries representing half the world's populations and the majority of its economic growth are refusing to participate in this new moral foreign policy, it's hard to argue that we are seeing some emergent new framework for international relations.

Second, the reasoning for applying a no fly zone to Libya is so selective as to make a mockery of the R2P principle itself. Where is the no fly zone over Yemen or Bahrain, where Western-supported dictators are slaughtering civilians? OK, you might say, but it's not like Saleh or al-Khalifa are strafing their civilian populations from the air, or vowing a war without pity. Of course, that's exactly what Israel did in Gaza yesterday, and it's just a few years ago that then-Israeli PM Olmert promised a campaign "without hesitation and without pity"... but curiously, no "no fly zone" over Palestine seems to be in the works.

Ultimately, I think Eugene Robinson gets the real story behind the Libya intervention exactly right, particularly in his last paragraph:

Gaddafi is crazy and evil; obviously, he wasn’t going to listen to our advice about democracy. The world would be fortunate to be rid of him. But war in Libya is justifiable only if we are going to hold compliant dictators to the same standard we set for defiant ones. If not, then please spare us all the homilies about universal rights and freedoms. We’ll know this isn’t about justice, it’s about power.

Image of the day II 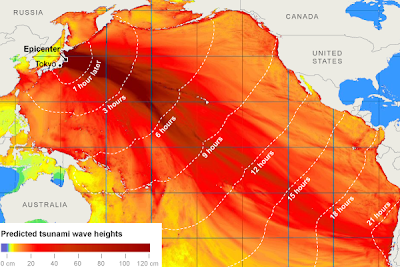 Image of the day

No just today's tragedy, but also warning about the warming future...

Critical to any effective strategy (corporate or military) is to be judicious about where to play. As a general rule, one shouldn't pick battles that one can't win. In Afghanistan, our biggest problem is that the United States has yet to define victory in a way that is achievable.

If the US continues to insist on defining victory in Afghanistan as "leaving behind" a social and political system in which the men there treat their womenfolk in a way we deem appropriate - the implicit argument, for example, of idiocies like the Time Magazine cover on the right - then there is little doubt that we'll be banging our heads against the mud walls of their villages for the rest of this century.

On the other hand, if the US chooses to define success as making it clear to the local Afghan leaders (yes, including the Taliban) that they must prevent terrorists from planning attacks on the West from their territory - and should they fail to do so, that we will rain holy hellfire down on their fields and villages - then we can probably find an exit in reasonably short order.
Posted by Nils at 3/06/2011 06:19:00 AM 1 comments