My dissertation advisor David Hollinger, about to assume the Presidency of the Organization of American Historians, has a terse rebuttal to the Wall Street Journal's claim that the Tea Partiers are promoting a more accurate version of the past than that produced by professional historians. While such a brief rejoinder is probably the organizationally appropriate response of the President of the OAH to such slander, I thought it would be worthwhile to provide a little more context for this skirmish between the official head of professional American historians, and what we might call the counter-professional version of American history that is widely promoted in places like the the op-ed pages of the WSJ or the Washington Post.

Over the last forty years, the production of American historical memory has been quite radically transformed. With the effective victory of a capacious, polysemous understanding of the past - which is the hallmark of professional history today - those who prefer a smaller, more politically or religiously sectarian view of the past have withdrawn into (or perhaps less pejoratively, have developed) their own historical epistemology, one that is barely in dialog with what professional historians do. The creation of this parallel, unprofessional historiographic universe is a politically self-conscious project of the American right, central to their effort to roll back the twentieth century's expansion of political inclusiveness, social tolerance, and the welfare state.

Producing an American past usable for the political right constitutes a sizable industry, one with far more influence than most professional historians realize - certainly more than I realized when I was in school. For example, I can't tell you how many people I meet - people who think of themselves as passionately engaged with the past - who really believe that, say, Mark Moyar's absurd interpretation of the Vietnam war, or Amity Schlaes's ridiculous interpretation of the New Deal, or Paul Johnson's tendentious interpretation of the Enlightenment [sorry, I refuse to link to such tripe], define these episodes wie sie eigentlich gewesen. Some such readers know that professional historians take such books about as seriously as professional athletes take the participants in "Wipe Out"; but insofar as they are even aware of the dismissiveness of the professionals, such readers tend to regard the attitudes of the professionals as merely typical of "liberal, elitist bias."

Despite certain notable exceptions, the political right in this country has largely given up even trying to fight with professional historians over the meaning of the American past. Rather than try to battle over truth using accepted professional standards of evidence and argument, the political right has taken their partisan interpretations of the past directly to the people, for example via the op-ed pages of the Wall Street Journal or the Weekly Standard, where one well-argued piece can gain a wider readership (and more political influence) than a hundred articles in the Journal of American History.

There's an underlying irony here, which is worth underscoring: while the political right has largely lost the interpretive battle for the American past among professional historians, they remain far more sensitive than the political left to the political importance of dominating popular understandings of key episodes from the past. They understand that inculcating the belief that the New Deal was somehow constitutionally illegitimate, or that the Civil Rights movement somehow represented federal overreach, or that the Vietnam War was somehow winnable but for perfidy at home are crucial in order to be able to promote the policies that they prefer in the present - whether it means rolling back the welfare state, ending affirmative action, or promoting aggressive neo-imperialist wars. This is precisely why partisan bloggers like Jonah Goldberg, Michelle Malkin, or Stanton Evans write books like Liberal Fascism (about contemporary liberalism's genealogical roots in interwar fascism) or In Defense of Internment (which describes FDR's internment of Japanese-Americans as his finest moment) or Blacklisted by History (which argues McCarthy was good and right about domestic Communism, and has been unfairly maligned by quisling-ish liberals and academics).
While such arguments might seem so grotesque as to be not worth dignifying with a reasoned rebuttal, we should not let scientific-professional judgments obscure the political influence that such books and arguments command among the hoi polloi. Though measuring these things is difficult, I strongly suspect that texts such as these have far more impact on the popular historical memory (and thus on contemporary politics) than virtually any Bancroft prize winner, appalling as that may be for professional historians to admit.

The reason why these books have such political impact is simple: it is because they are conceived and written first and foremost with a contemporary political intervention in mind.1 Indeed, the whole point of these para-historical productions of the right, their whole reason for being written, is not to "get the past right" but rather to influence contemporary politics. From a methodological perspective, right-wing popular historiography starts with a contemporary political or policy objective, then chooses an historical episode through which to convey the critical contemporary political point, and finally selectively marshalls evidence to support their contemporary political purpose. For these "historians," creating an accurate and complete representation of the past is entirely beside the point. (Indeed, even raising the issue of objectivity or balance is likely to get you labelled a liberal-biased pettifogger.)
The contrast with professional historians' standards of evidence and argument couldn't be sharper. Closeted positivists all, professional historians consider it their duty to capture the nuance, contradictions, and unknowability of the past, even where that conflicts with or complicates the usability of their conclusions for contemporary left-liberal (or any other) politics. Indeed, most academic historians are vaguely - or more than vaguely - embarrassed when they see such similarly partisan texts for "our side" of the political debate. (Just consider how most of us regard, say, Howard Zinn; or how our instinct is to bicker and quibble with a book like Nixonland.)
We are thus left with a profound irony. On the one hand, because professional historians basically support their view of the past, the political left for the most part doesn't bother to produce popular histories designed as interventions into contemporary politics. On the other hand, the professional historians fail to return the love, producing histories which are full of complexity and nuance, rather than pointedly partisan talking points. On the contrary, professional historians' efforts to capture the ambiguity and contradictions of the past tends to render problematic any simple lessons for the political present. It's only a small overstatement to say that professional historians, whatever their politics, are in the business of trying to render the past politically unusable. Ultimately, appreciating the perplexing richness of the past, which is what professional historians do, makes it difficult to produce historical narratives that serve a politics of slogans and zingers.
By contrast, the one-sidedness of the right's interpretations of the past is precisely what makes it politically powerful: having dispensed with the difficult task of trying to get the past right, the right finds it far easier than the left (with its crotchety insistance on empirical truth and complexity) to produce a past that has obvious and unambiguous political implications for the present.
1. Right-wingers assume that professional historians approach the past from the same (e.g. primordially political) perspective as they do, and that therefore what they are doing is simply providing a corrective to the leftist political bias of the academy. But in fact, contemporary political questions are almost never the point of intellectual departure for professional historians. Rather, professional historians usually begin in one of two ways: either they begin with a body of evidence historical evidence - an archive of some sort - and are seeking to make sense of it in some way; or they begin with some historiographical debate - trying to extend, rebut, or revise some existing (professional) historical perspective on whatever the topic at hand is. As a result of these approaches, professional historians tend to be much more fixated on methodological and evidentiary issues, which also helps explain why they tend to be less interested than popular writers in creating narratives focused on dramatically compelling characters and "events."
Posted by Nils at 10/23/2010 03:30:00 PM 15 comments

Adam Smith, on the righteousness of progressive taxation:

The necessaries of life occasion the great expense of the poor. They find it difficult to get food, and the greater part of their little revenue is spent in getting it. The luxuries and vanities of life occasion the principal expense of the rich, and a magnificent house embellishes and sets off to the best advantage all the other luxuries and vanities which they possess. A tax upon house-rents, therefore, would in general fall heaviest upon the rich; and in this sort of inequality there would not, perhaps, be anything very unreasonable. It is not very unreasonable that the rich should contribute to the public expense, not only in proportion to their revenue, but something more than in that proportion.

Face of the Day

Man carrying a shark to market in Mogadishu: 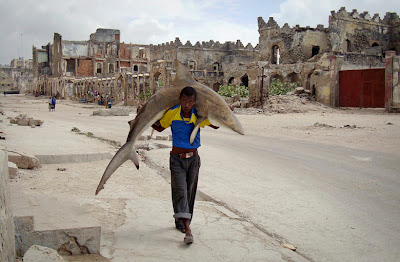